“What you hold in your hands is a collaborative effort of a community dedicated to healing, to cultivating a wholesome choice. I deeply appreciate what Verge Permaculture does and continues to do to acquaint people with innovative procedures. I certainly learned from each participant, and like iron on iron, this book was a sharpening process for me. Thank you for investing your time and energy–and money–to help your own successful healing occur and to enable others to participate with you. Together, let’s be part of the solution rather than the problem. Together we can make a better place for our grandchildren to live”

This pioneering package of Salatin savvy didn’t come about overnight….

In fact, it’s taken more than three years to evolve to this pitch of lavish amplitude!

And it never would have come about without the inspiration of Joel Salatin, who empowers his listeners worldwide to defy limitations and take action on their dreams.

Sure, as a regional permaculture education center we’d been in the business of hosting internationally-known speakers, on topics from urban water conservation to solar greenhouses to dryland restoration! Three days of Joel Salatin, live and in person, sounded pretty ambitious to us back in 2013.

But potential students challenged us – why not livestream these three workshops and make them available to the world in real time? We agreed to give it a whirl – and were deluged with responses! Roughly 150 international students from five continents joined our packed local audience of 100, and in one weekend Verge Permaculture became known from the Northwest Territories of Canada, across the U.S. and Europe, to Brazil, Australia and New Zealand.

Afterward, the requests came pouring in –  more Salatin, please! – and in 2014 our three-month online Salatin Semester was born. Joel and his son Daniel partnered with us, adding live teleconference Q&As to the original recorded lectures, and local lunatic farmer Andrew Bennett jumped aboard to moderate a student forum for three months of unbounded networking, cross-pollinating and shared problem-solving. More than 300 students signed up around the world, giving international perspectives on successful small-business, beyond-organic farming.

That’s when we realized that we’d built an enduring global resource. This was information that would endure as long as entrepreneurially-minded farmers-in-the-making cherished dreams of creating healthy families on healthy land and feeding healthy populations with healthy food!

So who are these three lunatic farmers, Joel and Daniel Salatin and Andrew Bennett,

who will be your guides on this adventure? Allow us to introduce them…

With three generations of family farming history, a lifetime’s experience in entrepreneurial, beyond-organic small farming, and growing international acclaim to back him up, Joel demonstrates conclusively that the dream of a profitable, healthy, sustainable, small farm enterprise is quite achievable and downright pleasant, whether you’re living in an urban apartment, a suburban single-family dwelling, or a full-sized farm holding!

During his 30-year leadership of Polyface Farm, he has passionately charted a beyond-organic course, challenging federal and state requirements over issues ranging from the local sale of clean, healthy, and well cared-for meats, to his right to opt out of a highly bureaucratic system that favors pesticides, fertilizers, and GMOs over time-honored – and leading-edge – integrative practices.

In fact, the Salatin family and their working team at Polyface Farms proudly say that they “haven’t bought a bag of chemical fertilizer in half a century, never planted a seed, own no plow or disk or silo”!

The result? Despite all the industry experts’ dire predictions, Polyface is now the world’s premier example of sustainable agriculture: a 550-acre, multi-family operation, supplying a customer base of more than 2,000 families, 10 retail outlets, and 50 restaurants. Its popular, high-value products include “salad bar beef” (named for the diverse, self-sowing pasture plants that the beeves eat), “pigaerator pork” (named for the pigs’ role in making compost and tilling the ground), “pastured poultry“ (named for the birds’ free-range feeding on the bugs in cattle and pig droppings), and forestry products.   Roughly six interns and two apprentices train on-site at the farm each year, while Joel spreads his gospel of sustainable agriculture at workshops around the world.

In fact, while Joel wryly calls himself a “lunatic farmer,” TIME Magazine has named him “the world’s best farmer” – and the New York Times titles him “Virginia’s most multifaceted agrarian since Thomas Jefferson [and] the high priest of the pasture!” 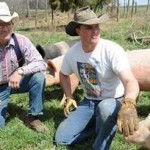 MEET THE NEXT GENERATION OF POLYFACE MOB-STOCKERS: DANIEL SALATIN

There’s no better way to develop mob-stocking small-farming entrepreneurial savvy than by tagging after an expert…especially when that expert is your dad! Joel’s son Daniel Salatin grew up on Polyface Farms and absorbed his father’s agro-ecological practices through a lifetime of full-immersion participation.

Daniel started his career early, carrying freshly processed chickens when he was in diapers, and by age 7 he’d started his first entrepreneurial venture: a pastured rabbit enterprise. That business is still continuing today, despite having the normal ups and downs, and it’s given him first hand experience with marketing, processing, research and development, and reinvestment of profits. 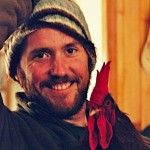 Calgary native Andrew Bennett—book editor & moderator of the student forum during the online Salatin Semester—spent his early years travelling for his parents’ work, landing in Jakarta, Indonesia, when Andrew was four. After high school, he returned to Canada to study astrophysics at the University of British Columbia.

Early exposure to the world’s eco-social problems ultimately took priority, and he left university to travel in Central America. Permaculture crossed his path and he began a pendulum swing between environmental degrees and real-life degrees as he followed his passion for agro-ecology, natural building, and the many ways people can lead fulfilling lives in harmony with each other and all life.

After a stint collecting data on wildlife tracks for a highway project in Alberta’s Rockies, Andrew and his wife Caley headed further west for winter fun in the interior ranges of British Columbia. They settled in Rossland to become urban farmers, inspired in large part by the humour, integrated ecological systems, sound business sense, and respect for nature encouraged in Joel Salatin’s books.

Andrew worked as a local journalist until he and Caley launched themselves full time into Moon Gravity Farm on leased land at the edge of town. They expanded from vegetable gardens to chickens, bees, rabbits, dairy goats, sheep, ducks, and geese. In 2013 they welcomed their son, Torin, to the mix, and they are getting set for his younger sibling to arrive…

After many years of tinkering in small ways with big permaculture ideas, the family is now growing diverse, healthy food on other people’s land using portable equipment and ecosystem design. They’re bolstered by the fervent belief that yes, with low capital investments, retail sales, and inventive creativity, eventually this will make a decent living while healing the Earth and building relationships between people and with the land.